We have been developed this stent with domestically produced technology and attempted to transmit the style of "medical-engineering-industry-academia collaboration" from Japan. To date, we have been involved in the development of various devices related to systemic IR, including a new lower extremity stent (in the shallow femoral artery region and below the knee artery: a national project by AMED), and microspheres for hepatic artery chemoembolization and other embolization (CIRSE2019, Cum Laude award), and contrast agents that can image the lymphatic system. we are constantly working on the research and development of products that people would want to use in the medical field. 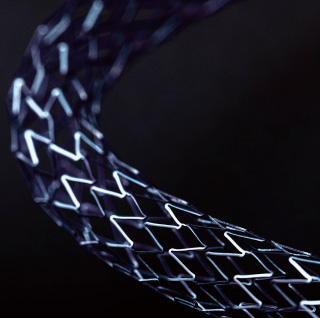 As the leg is called "the second heart," if blood flow is interrupted due to narrowing of blood vessels caused by arteriosclerosis in the leg, it may lead to difficulty walking or even amputation of the leg. In recent years, with the increase of lifestyle-related diseases such as diabetes, the number of cases of severe ischemia has been increasing every year. In the past, the only option would have been to immediately amputate the foot. The five-year survival rate is lower than that of some types of cancer when it leads to amputation of the lower limb. Reopening the blood flow is thus very important.

In recent years, advances in endovascular treatment have been remarkable, and catheterization has become common. There are two methods of vasodilation: vasodilatation, in which a balloon catheter is used to temporarily widen a narrowed blood vessel, and stenting, in which a metal stent is placed to physically widen the blood vessel even after surgery.

The arteries below the knee are narrower than 4 mm, and there are no suitable stents available. Our research group has been developing a stent that can be used for these small arteries below the knee. So far, we have developed a unique stent design that can ensure sufficient blood flow even when implanted in a small diameter artery. This stent is equipped with a coating that prevents thrombus and foreign body reaction, thus improving biocompatibility. Therefore, it can be safely implanted in the blood vessel and is expected to secure blood flow for a long period of time and avoid amputation of the leg. 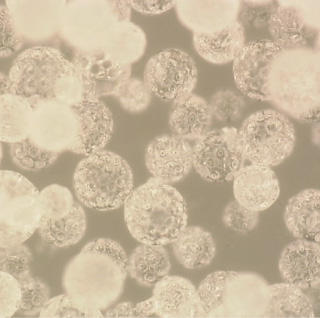 According to the International Agency for Research on Cancer (IARC) (GLOBOCAN 2020), liver cancer affects approximately 900,000 people, ranking 6th among all cancer types (4.7%). Hepatocellular carcinoma (HCC), which accounts for about 80% of all liver cancer, is treated with transarterial chemoembolization (TACE), in which a thin tube (several millimeters in diameter) called a catheter is inserted into the hepatic artery near the tumor, and drug-eluting beads (DEBs) with a diameter of several hundred micrometers are injected. The blood flow in the hepatic artery that supplies nutrients to the tumor is blocked, aiming for an anti-tumor effect.

Our research group is developing novel DEBs for safer and more effective TACE. The new DEBs are made from X-ray contrast media and bioabsorbable polymers, and are both visible under X-ray irradiation and bioabsorbable. Therefore, the embolization site can be seen through X-ray fluoroscopy and CT scan, allowing intraoperative and postoperative follow-up.
In addition, by changing the size of the new DEB and the type of the contained drug, we expect it to be used for a wide range of embolization procedures beyond TACE.

There is a wide range of diseases that alter the structure and function of the lymphatic system, including trauma, infection, malignancy, congenital diseases, and medical origin. Among the imaging technologies, magnetic resonance imaging (MRI), which does not expose patients to radiation unlike X-ray computed tomography (CT), has shown particular promise in imaging the lymphatic system. The use of gadolinium (Gd) contrast agents to improve the diagnostic performance of MRI has been attempted, but there are a number of technical barriers to high resolution imaging of the lymphatic system.