Medical devices developed with advanced technology offer new ways to treat diseases and symptoms that could not be treated with conventional methods. Close communication between doctors and engineers is essential for the development of such medical devices. Our team approach scientifically and bring about innovation in the world of medical device development by forming a strong medical-industrial-academic collaboration system.

After completing my residency in 1998, I went to Harvard University's Brigham & Women's Hospital to study under Professor Krishna Kandarpa in the Division of Angiography and IVR. At that time, I was still young, had little research experience, and did not know my way around. There were no Japanese people around me in my department. Professor Kandarpa treated me as a guest and did not expect much from me. I was not given any particular theme, but was simply told to think of something on my own. Three months after I came to the U.S., I noticed that I would not be able to do research or secure a position without a "grant" (public research funding). I had a vague feeling that I should do nothing and go back to my home country next year, or should try to get a "grant".
When I asked my boss, Professor Kandarpa, what I should do, he said, "Why don't you apply for a research grant from the American Society for IVR or NIH?" At that time, I had little duty other than attending clinical conferences and IVR cases. I had been interested in "prevention of restenosis after stenting" since that time, and I thought to myself that I would make it my theme. So I went to the library and read a lot of literature on the subject.
I don't know how much literature I read, but I carried around my "thesis bag" day in and day out, searching for papers whenever I could find time. So I decided to write a research proposal on a new theme, "Gene therapy for restenosis after coronary stenting," based on my vast search of papers by my own imagination and hints from the vast literature.

I completed my research proposal in two weeks and submitted it to Professor Kandarpa. He looked really surprised and said, "You can write? It's good, isn't it? But... this is too expensive. Since you can write like this, can't you rewrite it so that it costs less? Especially when it comes to genetics, it's going to be tough," he said, and left for a three-week conference. I spent the next three days worrying over it, and rewrote it on another feasible topic, but three days after I felt that there was no novelty. So I immediately tore it up and threw it away. I thought "Yes, I was desperate", and I decided to further refine my original research plan and resubmit it to my professor in three weeks. I spent three weeks without sleeping almost every day. When I came back, I submitted my research proposal to my professor with great enthusiasm. The professor looked surprised, but he understood my enthusiasm and suggested that I go for a large grant. He also agreed to allow me to work as a Principle Investigator (P.I.). After that, I had to go through various hurdles, but miraculously a research grant of about 50 million yen came to me. This was the first public funding I received in my life as a researcher.

Formed a research group with the Faculty of Science and Technology, Keio University
After returning to Japan, I became interested in developing a biocompatible platform as a drug delivery system (DDS) because I thought it was impossible to outperform the ever-evolving progress of so-called "drugs" and the strategies of so-called giant pharmaceutical companies in my development as a radiologist. While I was discussing my idea with various professors, Dr. Tetsuya Suzuki (then an assistant professor at the Faculty of Science and Engineering, Keio University) recommended me as a potential research partner. Although I did not know him, I did not hesitate to go and knock on Professor Suzuki's door. Professor Suzuki remembers that he was surprised to see me recklessly coming to give a presentation as a freelancer, dressed in a dirty outfit, but I thought it was very interesting, so I immediately decided to work with him. We were soon joined by graduate students, and motivated young students joined our research one after another.

In this context, I started to lead the research as a team leader of the medical materials group in Prof. Atsushi Hotta's laboratory and Prof. Tetsuya Suzuki's laboratory in the Faculty of Science and Technology at Keio University, where I got a doctor's degree in engineering on fluorine-doped inorganic thin films and am currently a visiting professor. Currently, Professor Hotta is active as the head of the Graduate School of Science and Technology, and Professor Suzuki is the director of the Keio Research Center for Advanced Science and Technology, and has been a key figure in industry-university collaboration.
Combining medicine and engineering to create medical technology that puts a smile on patients' faces! 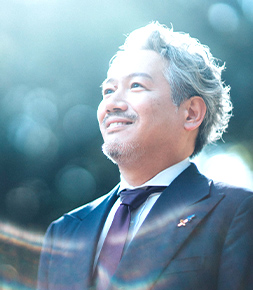 The most distinctive feature of our team is that clinicians, engineering researchers, and engineers communicate seamlessly on a daily basis via chat and web conferencing to deepen mutual understanding and promote research and development. In general, the medical approach tends to come from practice, while the engineering approach tends to come from theory. At times, when an engineering research cannot be feasible in the field at this stage, I place importance on how to integrate the two, taking into account the differences and balance between clinicians and engineering researchers. In Japan, there is probably no other environment where doctors, researchers, and engineers can discuss from a flat position like this. We are working every day with the goal of bringing the technologies developed in this way to the medical field and bringing smiles to patients' faces.